This past Sunday I was very excited for a Redskins Alumni event which was hosted by the homie Beardimus Maximus at Brock’s Riverside Grille in Fredericksburg VA. Anytime Psycho Panda can be involved with the Skins’ I’m in!! There were a few Super Bowl winners and two time Super Bowl winners on hand including Michael Nelms, Ravin Caldwell, and Roy Jefferson! Also in attendance was Jim Coates!!! Jim won two back to back MLB World Series in 1961-62 with the Yankees as the pitcher on a team that included Mickey Mantle and Yogi Berra!! Now what do all these people have in common??…they all love Psycho Panda Streetwear!!!..lets take a look…

This is Mr. Michael Nelms who played with the Redskins from 1980-1984. Mike went to Baylor like RG3 and played defensive back and most notibly was a kick returner. Mike holds the record for most returns and return yards in Super Bowl history. He won the Super Bowl with the Redskins in 1982. Thanks Mike for rockin with Psycho Panda!!

This is Ravin Caldwell who was drafted by the Skins as a Linebacker in 1986 and played from 1986-1992. He won 2 Super Bowls with the Skins in 1987 and 1991. He has one of the Top Five plays in Redskins Super Bowl history with his fumble recovery against the Denver Broncos in 1987. On a side note..while we were watching the game at Brocks Fox Sports announced his name and showed highlights of Ravin from the 1987 Super Bowl!! Perfect timing by Fox Sports!! Thanks again to Ravin Caldwell for helping the Skins win and for rockin with Psycho Panda!!

Meet Jim Coates!!! Jim is a 2x Major League World Series Champion pitcher with the 1961 & 1962 Yankees which is know as possibly the BEST TEAM EVER IN MAJOR LEAGUE! Some of his teammates include Mickey Mantle, Yogi Berra, Elston Howard, Bobby Richardson, and Whitney Ford. Jim was nicknamed the Mummy for his funeral like presence on the mound and currently has released a book called “Always a Yankee.” Be sure to check out his book and Thanks to Jim for rockin with Psycho Panda!! Check out some others sights from the event…

Shout out to The homie George Hope from FXBC (Fredericksburg Beard Club)! 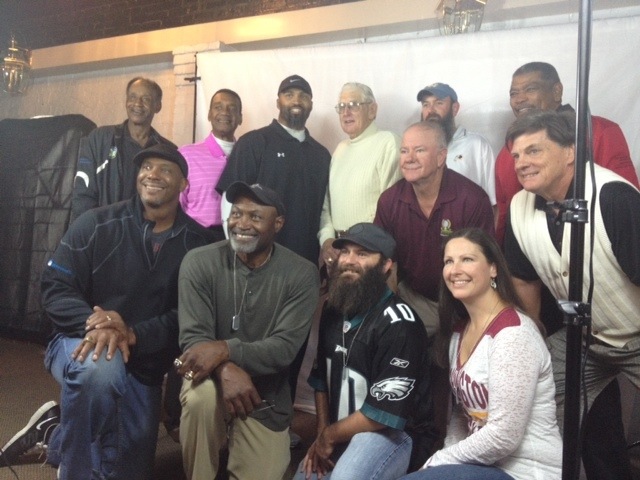 Thanks Again for Rockin with Psycho Panda!